Swamiji was born in Kerala, South India, in 1927. As a young child one of his main character traits was a strong will and determination. His mother, now known as Mataji who later took Sanyas (vows of renunciation) from Swami Sivananda, said that whenever her son wanted something, nothing or no one could stop him. An interesting anecdote tells how as a 5 year old youngster he had the strong desire to go to school and learn. When told that it was not possible since the nearest school was located more than 5 miles away, the child took upon himself to pack and go early the next morning for the long 5 mile walk through the jungle. He walked back that evening and would do the same for many years to come.

As a teenager without financial resources for University, he turned to joining the army to receive the scientific education he yearned for. During this time as he looked for a lost paper in a waste basket, his eyes fell upon a paper entitled “20 Spiritual Instructions” by Swami Sivananda. The pamphlet began: “An ounce of practice is better than tons of theory”. The practicality and inherent power of these simple words lead Swamiji to travel across India during a 36-hour leave to meet Swami Sivananda in far away Rishikesh in the Himalayas.

This short visit left such an impression on the young boy’s mind that he resolved to return as soon as possible.

On his second visit, the young disciple received 2 powerful lessons from Swami Sivananda. The first lesson came when Swami Vishnudevananda felt too timid and a bit arrogant to bow to the Guru Swami Sivananda. So the Master Swami Sivananda prostrated fully before the young student demonstrating the lesson of humility. The second lesson came during Arati (worship ceremony) to Ganga (Ganges river). Swamiji was perplexed and doubtful as he pondered why intelligent people would worship what scientifically is merely H2O. The Master then smiled subtly and gazed at Swamij who instantly beheld the river as a vast, bright, cosmic light. Swami Sivananda then invited the young boy to remain at the Ashram to study and become a Yogi. Swami Vishnudevananda spontaneously replied “Yes”.

For 10 years Swami Vishnudevananda continued at the Sivananda Ashram and was trained in all aspects of Yoga by Swami Sivananda. Swami Vishnudevananda quickly became an exceptional adept in the path of Hatha-Yoga and was a very keen and tireless Karma Yogi. One day Swami Sivananda gave Swamiji a 10 Rupee note (less than a dollar!) and his blessings to travel to the West and spread the teachings of Vedanta. “People are waiting” were the words of the Master.

Throughout his whole life, Swamiji was deeply concerned about the well being of the world and the constant disaster of wars. This lead him to learn to fly and then personally pilot a small plane over several troubled areas of the world. Not only did he create discussion and awareness in the news media, but he also “bombarded” these war torn areas with flowers and peace pamphlets while repeating the peace Mantra; Om Namo Narayanaya.

I have given you all I have with all my heart and love. It is for you to give to others. Sometimes I may not know all the answers, and I know that I have a long way to go. If you didn’t get anything, that’s because of my lower emotional nature. If there was anything good you got, it came from my great Master Sivananda. I don’t say that I’m an unemotional person. I scolded and talked endlessly. I acted like a dictator. If I were like my master, or like Jesus, I could wash the feet of my disciples. But for that one must be very high. It can only be done when the ego is gone. If I were to do it, it would be hypocrisy. I’m not that high. Once, some years ago, I prostrated myself before a man to whom I had been rude and impatient. As I was doing it, I was thinking “How humble I am.” So don’t look for an easy way to overcome your ego. For years I’ve tried. I watch myself as my ego manifests itself. I analyze. But it clings like a leech. When we can’t control ourselves, we should offer it to the Lord: “Oh Lord, I offer it to Thee!” And now, if in any way I hurt your feelings, I ask you with all my heart to pardon me. 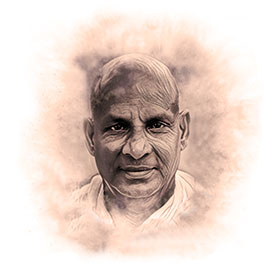 One of the greatest Yoga masters of the 20th century, Swami Sivananda, is the inspiration behind the Sivananda Yoga Vedanta Centres. The teachings of Master Sivananda are summarized in these six words: Serve, Love, Give, Purify, Meditate, Realize.